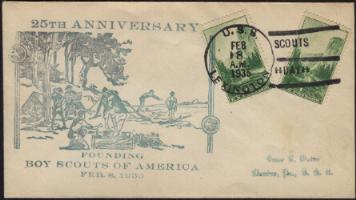 I visited the international stamp exhibition Capex 96 in Toronto, Canada, and enjoyed meeting many scout stamp collectors and SOSSI (Scouts On Stamps Society International) members at the society's booth and at their annual general meeting. Disappointingly, there were not many scout exhibits to see at the exhibition, but there were several dealers with a topical stock. Among various interesting and not so interesting scout stamps, covers and postcards, I was lucky to discover a bargain priced US 1935 cover bearing a not previously reported boy scout cancellation.

The cancel was used on the United States warship Lexington, and appears in black colour. The wording is "SCOUTS / DAY" in two lines between the bars, and some strange looking symbols that supposedly are meant to be scout badges. The cancel date is Feb. 8, 1935, the date for the 25th anniversary of US scouting. The cover also shows a scout cachet for the same anniversary, in a blue-greyish colour. Observant readers have already spotted that the cachet is printed over the left stamp. Close examination of the cover reveals that the cancellation is overlaying the cachet, and thus proving that it was printed before cancelling. The receiver's name and address are in the same colour as the cachet, and are possibly printed simultaneously.

The aircraft carrier Lexington with its 38,500 tons displacement was commissioned in 1927 and had a capacity of 80 aircraft. In the beginning of May 1942, she was engaged in the battle of the Coral Sea, north-east of Australia. On 8 May, the carrier was struck by at least two torpedoes and two bombs from Japanese carrier aircraft and fires were started. Some two hours later she was rent by a serious explosion as aviation fuel ignited. Fresh fires were started, and when it became clear that the ship could not be saved, she was deliberately sunk by five torpedoes from the US destroyer Phelps. 216 men were killed in combat or fire fighting, 2735 men and the captain's dog survived.

Including this recent find, we now have recorded 6 different 1935 US scout cancels, with 2 colour variations and one spelling variety. Should any of you have further information regarding these or other US scout cancellations prior to 1950, please inform the author. The illustrations of the other five cancellations are from the catalogue issued by ArGe Pfadfinder, the German scout stamps collectors club.

Jay Rogers has investigated the whereabouts of the naval vessels when they used the Boy Scout cancellations. He has kindly given me permission to publish this information, which is from the forthcoming 2nd Edition of "Levy's Boy & Girl Scout Cachets of the United States", being prepared by him.

This page is designed by Hallvard Slettebø. Please take a look at my homepage.
Please e-maiI me with questions, comments and suggestions for improvement: hallvard@slettebo.no
Text and Web Layout - Copyright © 1997-2002 Hallvard Slettebø.