During World War II, there were many problems associated to sending mail to and from troops far away from home. The amount of mail was huge, and mail transport from one continent to another was difficult. The allied countries developed a special postal service to reduce the mail volume. The English version of these sheets is called Airgraphs, while V-mail was the US system. 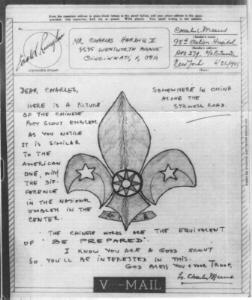 Illustrated sheets were handed out to the troops and their folks at home, where the sender could fill in name and address to the receiver. The forms were sent to dedicated V-mail stations, or photo stations, where they were photographed (16 mm film), and the film was sent to a photo station on the same continent as the addressee. There the pictures were processed and enlarged, and were mailed to the addresse by ordinary mail. The original forms were 21 cm wide by height 28 cm, while the processed forms are 10.5 by 13 cm. On the same side as the written or drawn message was space for name and address to sender and receiver. On the other side of the form were printed instructions for use, and space for address to the V-mail station. This side was not photographed. Personnel in the armed forces were allowed to send the forms postage free to the photo station, while civilians had to stamp their V-mail forms. The processed V-mails were sent postage free from the photo station to the receiver.

The sheet was folded after processing/enlarging, and placed in a special purpose window envelope, so that the receiver's name and address was shown through the window. All processed V-mails have therefore a horizontal bend slightly above the centre. The envelopes are not very exciting for thematic collectors, but on the V-mails and Airgraphs one can find many fine illustrations. The illustrations are considered to be fully postal, and can be used in a F.I.P. competitive thematic exhibit. Most common was the use of sheets with pre-printed text and illustrations, but there was also a possibility for writing and illustrating the sheet yourself. The sheets often show religious illustrations, such as Christmas or Easter greetings; caricatures or war scenes.

I have for some time been scouting around for a Scout related Airgraph or V-mail, and in 1995 I discovered a wonderful Scout V-mail at a US postal history auction. The illustration is hand drawn by the sender, and shows the Chinese Scout badge. This V-mail is now one of the gems of my Scouting collection.

For security reasons, the soldier was only allowed to write his address by means of a military post office number, but on this particular V-mail, he has written on the illustration "Somewhere in China along the Stilwell Road". It is sent 22 June 1945, to USA.

The original forms were supposed to be destroyed after receiving confirmation that the photography was successfully developed. A few forms have survived. Two original forms with Scout illustrations showed recently up on another auction, and I was lucky to have successful bids for both. They are sent to the post office in San Fransisco, and they are both sent towards the end of the war. The reason why they have survived will probably never be known, but either have somebody at the post office put them in the pocket, or they were stored until the war ended, and then nobody cared to destroy them. They are both sent by a civilian, and addressed to a soldier, and they are therefore stamped. The first V-mail form has a fine illustration in pencil and ink that shows a humourous caricature drawing of hiking Scouts. The other form shows a far more primitive drawing of Scouts crossing a barbed wire fence, and it looks like this drawing is made by using carbon paper to copy another drawing.

In 1998, a Scout stamp collector in U.K. has kindly sent a photo copy of an Airgraph with several small drawings of a Scout badge and Boy Scouts, Figure 5. Then, in 1999, I was fortunately able to purchase another Airgraph with similar drawings, Figure 6. Some of the small drawings are identical on the two Airgraphs, and they must have been produced by the same person!

In "newsletter" 2/2004, the journal of the Swiss Scout Stamp Collectors Club, Fredy Scherb presents the third recorded Airgraph depicting a Boy Scout, Figure 7. This Christmas Greetings 1944 item was written in Egypt on 5 November, 1944, and it has printed below the address: "Military Airgraph Service authorized by Egyptian Postal Administration". The illustration shows a Boy Scout below a Scout Badge. The text starts: Dear George. Just a few lines to show that I have not forgotten you or the Group. Rovering out here is very strong... Thank you to Fredy Scherb for allowing this information and illustration to be published on the web.

These are so far the only recorded pictorial Airgraphs related to Scouting.

The V-mails and Airgraphs often have text only, and no illustrations. With a bit of luck, one can also find references to Scouting in the text, as shown in the illustration below. Cubs and Scouts send their Christmas greetings to L/Sea R.D.F. B.J. Evans on board H.M.S. Arethusa. It is understood that the rather cryptic rank abbreviation stands for "Leading Seaman, Radio Direction Finding", and R.D.F. is today more known as radar. The H.M.S. Arethusa was torpedoed by low flying enemy aircraft on 18 November, 1942. The explosion and resulting fire took the lives of 156 men from the ship's complement of approximately 500. Radar operator Evans is not on the list of casualties.

A very interesting example of a text only V-mail is shown below. It was sent December 15, 1944 from Corporal Richard Geist, stationed in Puerto Rico, APO 845. Addressed to New Holland Girl Scouts, New Holland, Pennsylvania.

"To all Scout Members: Just a few lines to show my appreciation for the wonderful package I received from you all. The cake was delicious. Swell of you girls to do such a good job sending a box to each & every soldier from good old New Holland, who are doing their part in helping Uncle Sam to bring home victory & peace.
We soldiers are proud of you all back there who are doing such a wonderful job to keep the home front going while we are far away trying to keep the front line going on and on till we get what we are after, VICTORY.
I received the package day before Thanksgiving along with fifteen others...My locker looks like a small store, enough supplies to last metill next Xmas. Gosh that is counting far enough ahead. I hope to be back there with you all before the next one [Xmas] comes around. This makes the third one I have spent overseas.
We had a swell Thanksgiving dinner. Turkey, mashed potatoes, candied sweet potatoes, filling, gravy, cranberry sauce, corn, peas, pie, cake, ice cream, buns, candy, fruit, & mixed nuts. I hear our Xmas dinner is to much better yet...I will say thanks again so very much for remembering me with such a wonderful package. Keep em flying. Best wishes, Richard."


Another interesting example of a text only V-mail is shown below. It was written at Nancy, France 12 July, 1945 and sent to U.S.A. After end of WWII it was allowed to mention the location of the military unit. The sender mentions "the doings of the troop", and "leader for T.I." The Treasure Island (T.I.) Scout Camp is a Boy Scout camp located in Pennsylvania, New Jersey.
The written message reads: " Dear Pin. I received your letter of June 24 and once again it came through without being photographed. You just can't paste pictures on them. I was glad to read about the doings of the troop and I am sure they are going to have a successful year. I heard from Joe Economy the other day and he wrote a marvelous letter it was like a book. I really don't need anything as yet and if I do I shall be only glad to let you know. At present I have some film and I don't even eat the candy we are entitled to. We are getting ice cream and cookies so you see we are in good shape. I suppose you had a tough time finding a leader for T.I. by the way who did it turn out to be. Sincerely Bill.".

Yet another interesting example of a text only V-mail is shown below. It was written on board the U.S.S. Arctic on 20 March 1944, postmarked five days later and sent to Eagle Scout Harold McKenzie, Lebanon, Indiana, U.S.A. The written message reads: " Dear Harold. Warmest congratulations. You certainly have a fine record in Scouting - Keep it up! Cordially, Ed Gullion. Quite possibly a message of congratulations to winning the Eagle Scout Badge.

Acknowledgements:
Thanks to Estanislao Pan Alfaro, Roberto Basso, Alan Berman, Peter J Duck and Fredy Scherb for their valuable contributions to this article.

You can find general V-mail information at Bill Senkus' site.

As far as I know, these are the only recorded Scout related pictorial V-mails and Airgraphs.
Please inform the author should you find any other such items.

This page is designed by Hallvard Slettebø. Please take a look at my homepage.
Please e-maiI me with questions, comments and suggestions for improvement: hallvard@slettebo.no
Text and Web Layout - Copyright © 1997-2016 Hallvard Slettebø.